The new Wine by Numbers is online 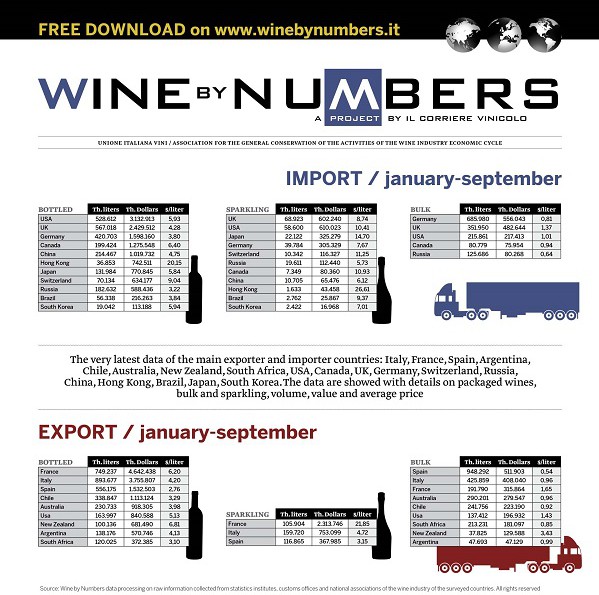 The first nine months confirm a certain stagnation of world markets. In terms of bottled wine, the USA and Germany saw declines in volume and weak increases in value, around 2%. The UK market (at least the market that does business with France), on the other hand, still has to get over the long wave of Chinese austerity, turning in a -10% on values and imposing rather high price cuts on suppliers: -7% in Italy, 10% in Spain, not to mention the 30% discount on Bordeaux. Canada was one country that avoided the particularly “corrosive” dynamics, although growth was only around 2%, while there was a recovery, albeit weak, on the Chinese market after a disastrous start to the year. Here, however, Italy continues to underperform alarmingly, while the Chileans and Spanish are doing well. Even the nearby market, Hong Kong, does not stand out for any exceptional changes, except for the fact that there has been an invasion of large supplies of bottled wine (mostly for re-exporting) from China, which has become the third supplier in value. Japan continues to be penalised by its currency, forcing importers to do somersaults to keep purchases in line with last year. Here, as in China, thanks to free trade agreements already in place, the Chileans are the ones enjoying the largest increases in terms of volume. The Australians are trying to reap the benefits from the bilateral agreements too, both with Tokyo – where the effects will be seen in the next seven years – and especially with Beijing, where the newly signed protocol will remove all duties and taxes over the next four years.

Another uncertain market is Russia, where today Italy seems to be holding its own, but a phase of high market protection is beginning that goes far beyond the temporary conflict with European Union and US. Staying on wine as a product in itself, the red alert has not yet been given, because when local importers feel the difficult climate they start to stock the product. This is not shown in the statistics yet. Most certainly, the skirmishes with Brussels, if they continue, could be felt in the course of the next year, given that the ban on European food products is beginning to show its effects on restaurants. Moreover, if the restaurants go to the dogs, foreign wine will follow close behind.

Let’s look at sparkling wine, which seems to be the only item not feeling the crisis. All major markets (except Germany, which is oversaturated, with domestic products too) recorded robust growth. What should be reflected on, however, is the price paid for this growth, and in particular by Italian producers on one of the largest markets, the United Kingdom. In the UK, the going rate for a litre of Prosecco is 2.66 pounds per litre, i.e. -16% compared to last year. However, below this is a whole tinderbox of common products that today do not exceed the 2 pounds price tag (i.e. -53%).

Coming to the performance of the major exporting countries, France is still struggling to recover from the blows taken by Bordeaux in China and reflected in the UK. However, some signs of improvement are beginning to be seen, obviously in relation to a disastrous start to the year. Shipments of Champagne recovered, same things for varietal wines Vins de France, after 2013 when the death bell was heard for this product that had been considered a key product, especially in the UK.

Italy’s first nine months balance is quite flat: on the bottled wines, key markets such US and Germany are slowing, UK is going down, and prices do not grow. Price is a hot topic for Italian sparkling wines as well: what appears as an enigma is to understand why a product with a huge request from the markets such as Prosecco – with double digit growth in US and UK – has been constantly reducing prices since January, with a loss of about 7% (25 eurocents per litre). On the bulk market, Spanish tornado has blown Italians tanks away from Germany and Eastern Europe markets, with a global fall on values of about 20%.

Spain, thanks to rock bottom price lists on bulk wine, is making a clean sweep of its competitors in every part of Europe, while as regards bottled wine, the price is always the lever used by the vast majority of bodegas to open new markets, primarily China, where performance in terms of volume is staggering.

The first nine months for the Americans were not very positive, and September turned out to be rather bad indeed, veering to the negative. The Canadian market, however, held (and this counts), but London and the entire Asian continent, where Californians were beginning to gain increasingly solid stakes, got worse.

Australia is on its way to filing yet another year in the red in terms of bottled wine, exacerbated by the worsening of affairs in Asia, where it hoped to divert the product rejected by Westerners. Australia’s New Zealand cousins, on the other hand, seem to have found the answer and solved the problems caused by production excess, returning to average quotations worthy of the prestige they had gained over the years.

A look at South Africa. On the export front, there are no particular problems. The weak rand is helping to clear the abundance of production. However, the country situation, with its rampant inflation, is an uncertainty that burdens companies that are struggling with high production costs and profitability in steady and alarming decline.

In South America, there are those who are crying and those who are laughing. Let’s start with the latter, the Chileans, who are taking full advantage of the bilateral agreements with China and Japan and are on the launch pad to have renewed success in America, where duties will be removed in January. A very timely announcement, seeing that the nine months on the US market have been far from exhilarating in terms of bottled wine. This may be read as a sign of stagnation for products – such as Cabernet Sauvignon and Carmenère – which are in need of new stimuli more than ever (recent shipments of massive quantities of bulk wine to the UK, in the wake of what the Australians have done, are still to be evaluated as regards long-term strategy).

Argentina has still not found any further stimulus and in the meantime, the US bulk wine market has been snatched away by the more economical Chileans. While in terms of bottled products, the only joys for Mendoza come from London, whose constant growth in volume seems to be a partial consolation to a disastrous nine months in North America. In short, even strategies for Malbec need to be reviewed, as we wait to see how (and whether) the message will evolve in the East.