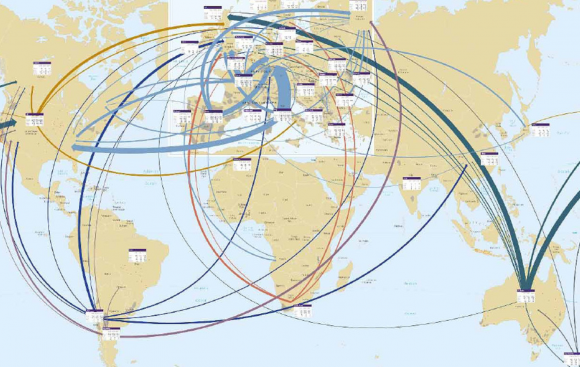 An unsteady first quarter opens the 2015 for the global exchanges of wine. On the bottled wines segment (not sparkling), the aggregate Europe, America and Asia reaches the volume of 711 million liters, with a 2% negative change on the first quarter of 2014. It’s the second loss after the one occurred in the last quarter of 2014 (-2% again), cutting down a positive trend started in the second quarter of 2014, but progressively weakened during the year.

In the figure, the quarterly evolutions of the aggregate, joining together Germany, UK, Switzerland, Russia for Europe; US, Canada and Brazil for America; China, Hong Kong, Japan and South Korea for Asia.

Last, prices. As we can see by the figure, the value per liter is balanced in Asia (thanks to China), but the trend reports an erosion of prices, deeper in core Europe, where the 4 US$ threshold has been crossed down for the first time since 2012. The aggregate total is on the average of 4,95 US$ per liter, -5% on the same period of 2014.

Don’t forget to free download our Wine by Numbers Yearly Edition,
with the trends of global wine exchanges in 2009/2014.
Click here to start downloading