The 2014 performances of the main importer countries 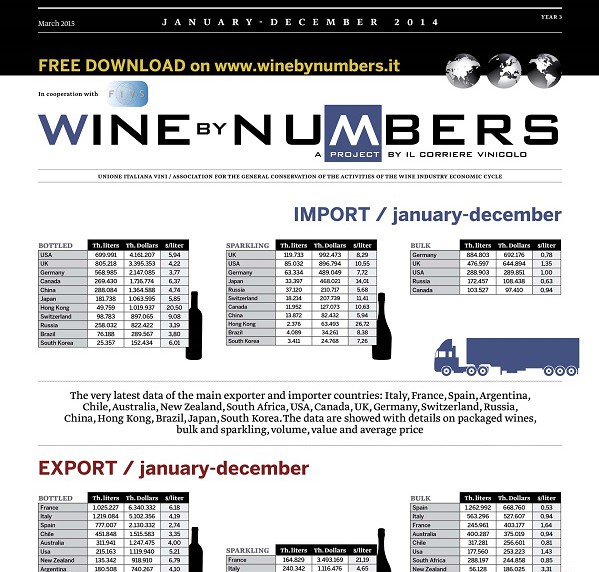 2014 will not go down in history as a very lively year for the world wine market. As regards bottled wine, the top three markets – the US, UK and Germany – showed signs of fatigue, with very weak growth in terms of value and reductions in volume. In London, the end of year balance also reflected the very uncertain beginning to the year, which was due to the Chinese crunch that undermined the triangulations of wines from Bordeaux.

In America, however, there is a return towards European wines, to the detriment not only of Australian wines (that have not seen increases in bulk sales either), but also Chilean and Argentinian wines, which after years of frenzy, now appear to be fading. Still on the American continent, Canada appears to be the most active market where regular growth trends were confirmed, thanks largely to the boost from supplies from the US. Over the last three months, Brazil partially recovered the weak beginning of the year, even with the recovery of European suppliers, such as Italy. The Chileans confirmed their position as the absolute masters of a market from which we would actually expect more (among other things, 2014 was the year of the World Cup, but nobody seems to have noticed in the wine business).

Another country whose growth gave way to great expectations was Russia. After a good start, though, later in the year the winds of crisis started to be felt. The general balance is positive (especially for the Italians, who for the first time overtook the French), but it could be the classic calm before the storm.

Across the globe, in Asia, towards which the wine industry looks with great hopes, it has to be said that a very complicated year has just ended. On the one hand, there is the Japanese crisis, with the gradual depreciation of the yen that has weakened the spending power of importers, forced to jump through hoops to keep – at best – the same volumes as in 2013. Things are going very well there only for those with some commercial-type advantage, such as the Chileans, driven by trade liberalisation. In China – but also in Hong Kong – the moralising wind of the new government gave serious trouble to the French first and foremost, which after a start to the year recording a – 30%, gradually recovered, limiting the damage to a minimum. Beijing, however, is showing a new face, perhaps less smiling, but more true and without pretence. After doing away with the superstructures, the real market – made up of people in flesh and blood – is beginning to take shape with more clarity. This will force everyone, including the French, to question long-established sales strategies. And who is still small – like Italy and Spain – to begin to establish long-term relationships with local partners.

The market for sparkling wines, however, sees on the one hand a certain recovery of shipments of Champagne with significant performances on key markets. On the other, and here we are talking about the US and UK, the Italian Prosecco is continuing to climb the rating charts. It should, however, be noted that the growth in the last year was accompanied, especially from London, by rather substantial pricelist cuts. This, for a product at the height of success, appears to be a contradiction.

In Germany, the accounts show a market that has become saturated, where even local producers struggle to sell their products. Even in Russia, the French, Spanish and Italian bubbles (such as Asti Spumante) have suffered a resounding slap, which is likely to be repeated – and even stronger – this year.

Finally, bulk wine: 2014 was the year of Spain. The huge harvest in 2013 forced the bodegas to sell off everything they could. This enabled them to take away market share from their direct competitors, the Italians, on the Central and Eastern European markets. This in turn imposed a crushing of prices on Italy where due to the 2014 shortage, they could have done with oxygen in the way of money. The consequence is that Italian wines are, despite themselves, violating the golden rule “little product = higher prices”.

In the UK, bulk imports grew again, achieving the historical record of nearly 5 million hectolitres of wine out of a total of 14 million. Of this amount, Australia accounts for almost half and the New World as a whole almost 80%. This long-standing phenomenon would seem to impose a serious reflection on European countries, which so far has been avoided. Finally, the American market is flat: the plentiful 2013 in California made more targeted purchases with the cheaper Chilean wines gradually taking over the Argentinian ones.

All the data and figures on Wine by Numbers Quarterly Edition, freed download here

Read the performances of the main exporter countries here