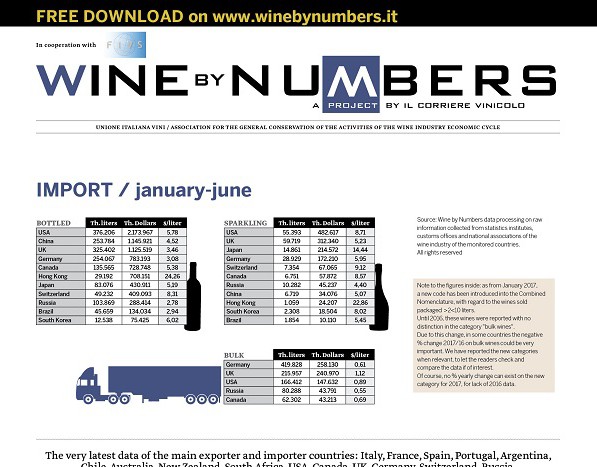 With the “Asian fuel in the engine”, the volume of world trade jumped to record levels in the second quarter of the year: from April to June over 9 million hectolitres wine were imported in the major countries (+4%), a level never reached before in this part of the year and just a little lower than the 9.4 million hectolitres absorbed in the fourth quarter of 2016, which is traditionally the period with the highest trade peak in view of the closing of the year. Even in value terms (4.3 billion US dollar), the gaps between the closing of 2016 and the second quarter of 2017 are reduced almost to the minimum: 140 million US dollar, considering that the average of the last five years was around 380 million.

Therefore, there was a real boom and China played the starring role. Its performance – together with the rebalancing dynamics registered in North America – compensated not only for the uncertainties of the Japanese market, but also for those of the main countries of the Old Continent, first of all the UK and Germany, but even Russia, whose recovery seems to have dampened compared with the trend at the beginning of the year.

With regard to average prices, the world total is confirmed in the range between 4.70 and 4.80 US dollar per litre, where it has been since the beginning of 2015: this figure is the result of Asian (from 7 to 6 US dollar) and European (from 4.50 to 3.50) involutionary dynamics and of a strengthened stability in the American continent (stuck at 5.50).

Get the new edition of Wine by Numbers Quarterly Edition for free to read the complete text and figures. Click here