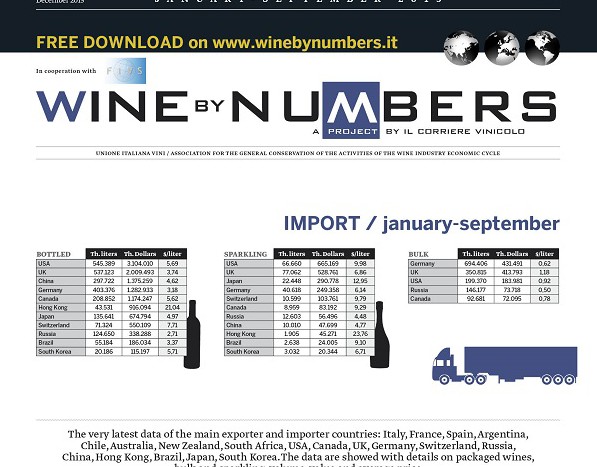 Finally, the evolution of world wine trade (bottled wines, sparkling excluded) turns to positive in the 3rd quarter of the year, with a primary contribution provided by the Asian continent, which discovers the return of a strong growth in China. From July to September, the aggregate Asia – sum of China, Hong Kong, Japan and South Korea – stops the index just below 1.9 million hectoliters, which means a 29% increase compared to the same quarter of 2014. The value of the exchanges climbed up to 1.1 billion US$, a figure that not only confirms the trend of the 2nd quarter, but enlarges the annual growth by 4 percentage points, up to +19%.

Thanks to the Asian propellant, the aggregate world monitored by our magazine (sum of the Americas, Asia and Core Europe) soars to 8.8 million hectoliters of imported bottled wine (+3% compared to July-September 2014), with values jumped to 4.1 billion US$. This new figures invert the negative trend accumulated since the end of 2014, bringing the final balance to -5% against the -7% of the first two quarters of the year.

There’s an only ballast, and this is the European continent, where Russia – although improving compared with the horrific first half – seems to need a little more time to rebalance the weights of the continent in a positive way. On the other hand, the negative trend of Germany and the steadiness of UK market are not able to give a positive turn yet: the total volume in Q3 for Europe (sum of UK, Germany, Switzerland and Russia) is equal to 4.1 million hectoliters, -6% on the same quarter of 2014. Values are about 1.5 billion US$, meaning a decrease of 19% YoY.

Let’s come to Americas, where the US and Canada are enjoying the strengthening of their currencies on Euro. The aggregate values in September show decrease, obviously (-3%, 1.5 billion dollars), and this should be considered as a result of the currencies floating: between July and September, the US dollar has gained 16% on Euro, which would turn the balance of trade into a positive trend. On the volume side, the balance is positive by 4%, up to to 2.8 million hectoliters imported into Canada, US and Brazil.

A final note on prices: on the Asian front, the bigger growth in volume is generated by a slight decline in the general price lists, which have been appearing in a negative trend since the beginning of the year (for the first time, the average price paid in the continent fell down below 6 US$ per liter). Explains this phenomenon the behavior of Chinese buyers, in association with the gradual realignment of the Japanese data, no longer weighed down by the Yen floating as in the 2014 and first half of 2015.

We see steadiness in the American continent, set to 5.51 US$ per liter since January, but on the other hand the fall in prices paid in Europe is not slowing, with further 10 cents per liter lost in the 3rd quarter, at 3.58 US$.

Combining all these figures together, we have a global average price of 4.66 US$ per liter in the 3rd quarter of this year: 3% less than in the quarter ended in June, that become -8% if compared to the same period of 2014.

Get the last edition of Wine by Numbers Quarterly for free, with the detailed data of all countries. Click here